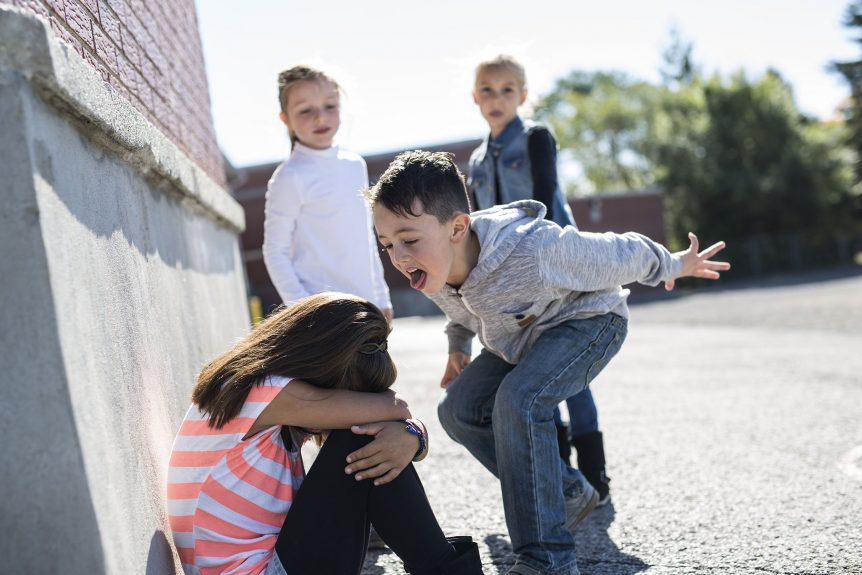 Bullying is not OK

Bullying has deep, devastating outcomes in children and teenagers. Even worse, its influence may continue affecting the victims even when they are adults. It ruins social lives, harms school performance, and has even led to suicide in many cases. Anyone who has or works with children should educate themselves on the toxic effects of bullying.

Read on to learn more about what bullying is, why it is never OK, and how to recognize, prevent, and stop it.

Bullying happens when a child is singled out by another child or a group of children who pick on him or her. The bully or bullies might taunt, mock, coerce or abuse their victim verbally or physically.

Bullying can be obvious, such as public slurs and insults, or more subtle. One example of covert bullying is socially isolating a child by threatening other children in the class not to be friends with them. Bullies usually pick on a victim’s weaknesses. They tend to target children who are sensitive, insecure, lonely, different, or vulnerable in some way. Bullying can take place in school, during after-school activities, or on social media that the children or teenagers use. Both boys and girls can be bullies, though the tactics they use may be somewhat different.

Bullying happens so often that it is considered almost normal and treated as a school life ‘rite of passage’. This attitude is wrong. Bullies can literally destroy their victims’ lives. The responsible adults in charge should keep their eyes open for signs of such behavior and do all they can to stop it.

How to Recognize Bullying

Many children fight or tease each other without being either bullies or victims. Bullying is a demonstration of one child’s power over another. Bullies use tactics of fear and aggression to control and humiliate their victims, often when other children are watching. There is a consistent pattern of one child picking on another over and over again.

The Devastating Effects of Bullying

Children who are bullied have low self-esteem, are less able to concentrate on their studies, and often feel isolated. Bullying has led children and teens to self-harm and even to suicide. In some cases, this happened after they have asked their teacher or principal for help but were not taken seriously. Bullying can cause depression, anxiety, trauma, and nightmares. It does not allow children to develop the confidence and trust in others they need to thrive. Sometimes, the damage lasts for many years. It can lead to insecurity and social anxiety that can only be resolved with long-term therapy.

Bullies suffer from their own behavior too, although they may not be aware of it. Deep down, they have low self-esteem, which they try to mask by aggression. It is difficult for them to develop real relationships, which are quite unlike victim-aggressor interactions. They struggle to understand boundaries and laws, which makes it more difficult for them to become productive members of society and have successful careers. They are more likely to end up in prison as adults.

It is possible to teach the bullied child or teen how to cope with bullies, such as staying calm, walking away rather than engaging with the aggressor, not showing fear, and speaking firmly and rationally. The child should not be afraid or embarrassed to ask for help. Often, victims of bullying are shamed for being “sneaks” when they complain, which essentially puts them in a lose-lose situation.

The bullied child may be encouraged to do things that boost their self-esteem, such as sports or other activities they are good at. They can make new friends, perhaps outside the school. Children who are happy and self-confident are less likely to be bullied. It is also possible to move the child to a different school and give them a fresh start.

However, all of that does not address the core problem, which can only be resolved in one way:

School authorities, such as the teachers and principal, should treat bullying seriously. They should follow up on every case until satisfied that it has been resolved. They should make the school policy very clear to bullies, explaining exactly what will happen if they don’t follow rules and continue with their aggressive behavior. Targeted talks in classes can teach children how to treat others with respect and raise awareness of the damage bullying does. This way, even if individual bullies remain, they will not get support from the rest of the group.

With firm, consistent actions, it is possible to erase bullying as a widespread social practice. It is not an easy task, but one worth fighting for.